“Based in Porto, the ØxＯＰＯＳɆＣ group was started by g33ks who are passionate about security. The meetup primary mission is to discuss and tackle upsurging security issues by leveraging the expertise and know-how of members of the group.” This is the write-up of the challenge at the 0x70 meetup edition, by DDuarte and André Morais.

Jumping to the challenge. We’re given an URL to a Twitter-like website named Twipy (image). From the name, we can conclude that maybe it is made in Python. We know that there are 4 flags to be found:

All the flags have the same format: {flag}Rand0mStuff

First things first, lets make some recon even without creating an account. Firing up a dirsearch maybe will give us something. The results can be summed up as follow (200 status code results):

So, from dirsearch, we found an exposed .git folder and a debug.log file. Downloading all the things with wget.

Before moving further, firing up nmap returns only ports 22 (SSH) and 80 (HTTP), so nothing unusual here. We could try to find the credentials for the SSH, but it is a long-shot from the beginning. Firing also sqlmap on all the possible injectable fields (login form, account reset and next query param) also resulted in a dead-end. 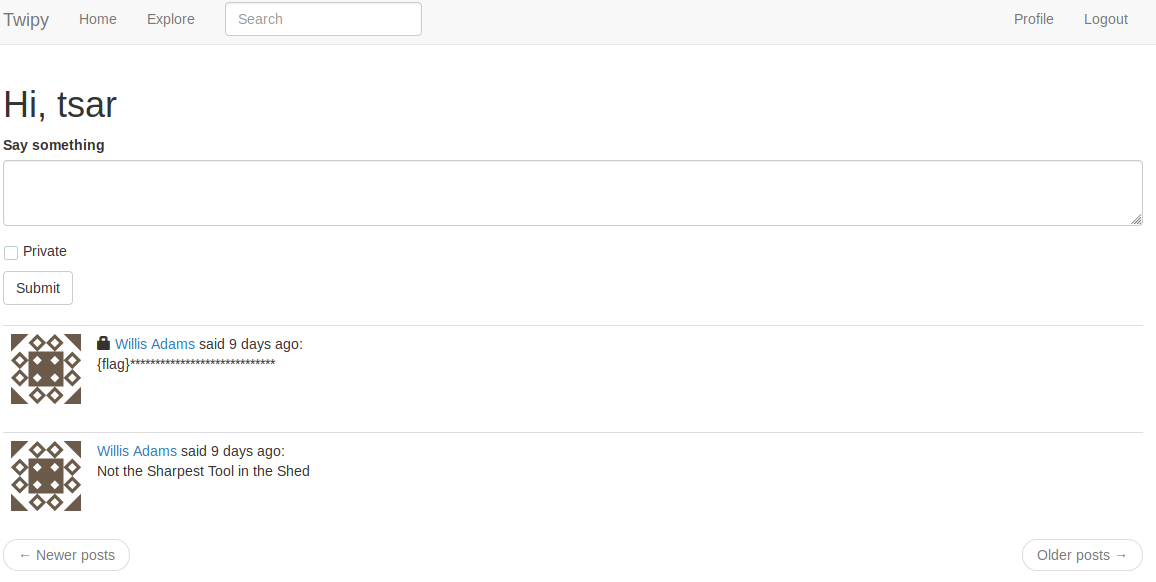 Moving further, and creating an account, we end up with a timeline (image). In the image we can see another user posts, Willis Adams, which has two messages being one of them a private message that we can only see the first 6 chars: {flag}*****************************. Only the Willis Adams user can see the message behind the asterisk, but it is a flag.

The other features of the website like the update profile, explore other users tweets and searching resulted in dead-ends.

After finding the .git folder, the next obvious step was to try to recover all the source code. By making a $ git status we could see all the files that were deleted.

Running the above command restored all the files to their most recent version (before being deleted). By checking the $ git log we found out some curious commit messages like Don’t disclose mail password :), but I could not find anything by analyzing the git diffs.

Since we know that all flags have the same format, making an exaustive search among all files and revisions:

And so, we have our first flag:

During our recon phase we found out that a debug.log was exposed and accessible. Analyzing its contents we could immediatelly find the next flag:

Further, we found out that calling http://example.com/flag was the trigger to write that exception to the log file.

Since we now have access to the source code of the app, and sure that the app is written in Python, one of the first things that come to mind is Server-Side Template Injection. Reading some tutorials and write-ups about the subject I found this one as being the most straightforward: Flaskcards challenge at Pico CTF 2018.

To find if the website is vulnerable we simply tweet {{ 7 * 7 }}, and in the alert-info box we got the following response: You just posted: 49

So our code is being executed. In order to exploit Template Injection firstly, we must find out what is the template engine being used. To do so, the probe {{7 * '7'}} would result in 49 in Twig, 7777777 in Jinja2, and neither if no template language is in use. In our case, the response was: You just posted: 7777777, so we’re dealing with Jinja2.

We could also reach the same conclusion by analyzing the Python packages in the requirements.txt file. And we could also identify the vulnerable code:

The next step was trying to get the config, posting {{ config.items() }}, which resulted in an alert-info with a lot of information that is contained in the config, including:

So we have our third flag:

Flag 4 - This link is bamboozling

One of the things that can be easily noticed is that each user has a unique UUID, e.g. ae1677ca-f7bd-431a-8280-8fdf4aa801ca. We can also visit other users profiles and get their unique UUID.

Since the passwords are randomly generated in the twipy.py, brute-forcing would take too much time. Another attack-vector can be the recovery password mechanism. By analyzing the structure of the recovery link, we notice that it resembles a JWT token:

In the models.py file we have the following logic for assigning and validating recovery password tokens (JWT tokens).

Since there is no call to database or nounce being used, we can make our own JWT tokens if we know the SECRET_KEY (from the third flag) and the UUID of the target user, in this case, the god user.

By making a simple script (checking out in the requirements.txt the Python package used for the JWT - PyJWT), we can get the JWT token in question.

By setting a new password to the god user we can see their private tweets thus getting the flag.

It was a nice web challenge, always learning a little bit more about infosec and CTFs. Kudos @dduarte and @AndreMorais for the challenge.