Yet Another Raspberry Pi Cluster

Those who are hardware tinkers and hackers know how easy it is to accumulate hardware thingies: single-board computers, microcontrollers, sensors and so on. One of those are Raspberry Pi’s of different version that lay around accomulating dust. It was time to give some usage to those idle computing resources in the form of a cluster for doing some experiments with networking, distributed computing, automation, etc.

Back in 2012, a new thingy appeared that reshaped the meaning of low-cost and small single-board computers: Raspberry Pi. Its ability to run Linux and its exposed GPIO pins allowed it to become one of the most common pieces of hardware in every electronic enthusiast’s storage1. As of today, there are five different hardware families and more than 12 different models available. As a result, I had a few of these spread among storage shelves, but I always felt bad for having computing power just lying around and accumulating dust. The idea of using them as a computing cluster kept appearing in the usual places: Hackaday2, OctaPi, hackster.io, … so it appears that the time has come to do my version. This would be a pretty good playground to carry experiments with networking, distributed computing, DevOps, etc. 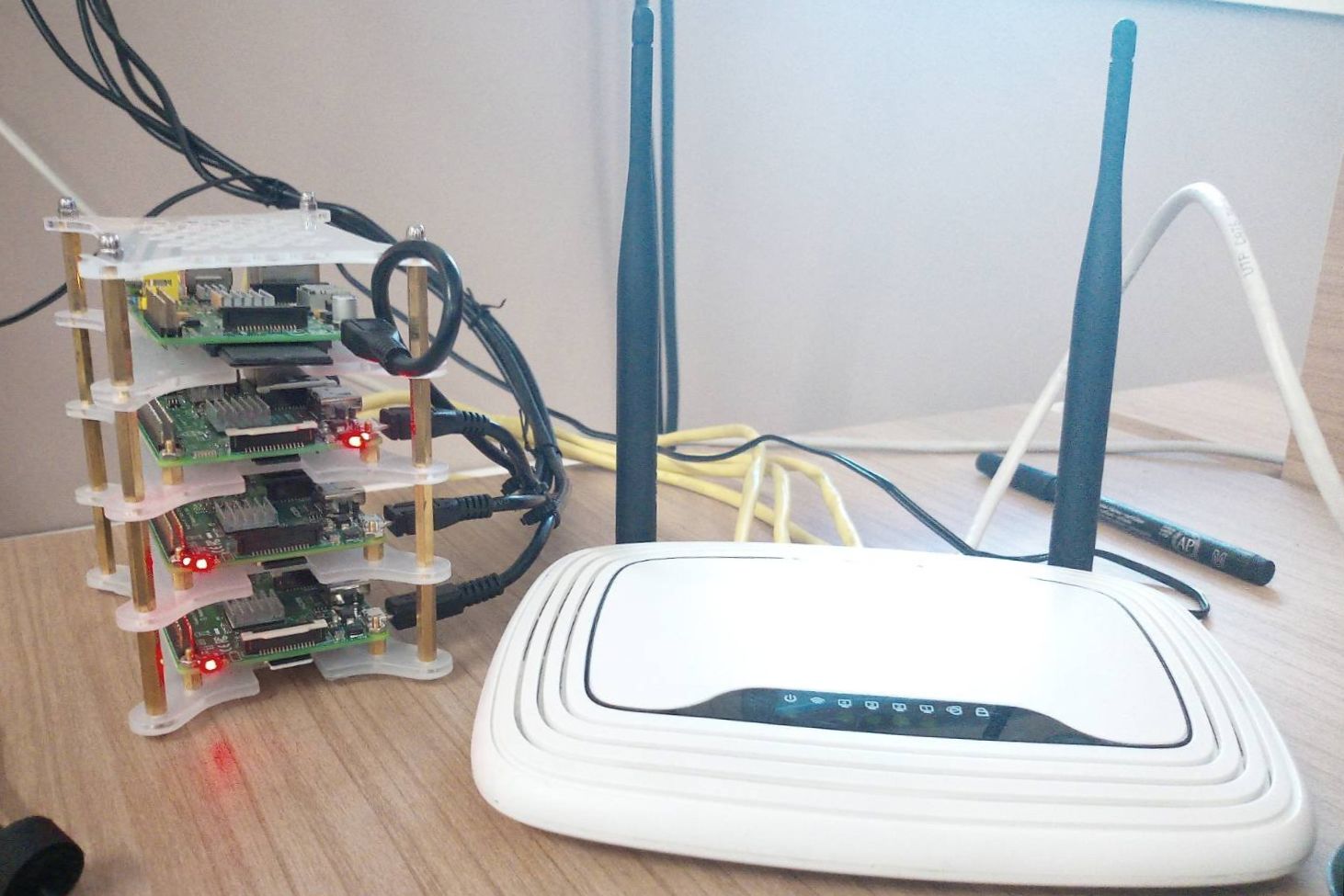 One of the objectives was to reduce the new purchases to a minimum (but, as always, this is more easily said than done).

The 4-port USB Charger 5.4A is not the best option since each RPi can take around 2A; however, it was available in a nearby store, and since some of the Raspberry are older versions, it will likely suffice for the intended purpose. I, however, intend to upgrade all the system to use a common power supply unit (including the router).

First things first, there is the need to format all the SD cards with a Raspberry-compatible OS. Since this is for headless usage and wanted things to quite work out of the box, I picked the latest Raspberry Pi OS Lite from the official website, which is Debian-based and compatible with all hardware revisions.

I flashed the SD cards using the balenaEtcher. After the flashing is complete, one manual step is needed to enable SSH on the first boot automatically: just touch a file named ssh on the boot partition of the SD card (more here). This allows the complete headless configuration of the Rasps.

So, my end-goal was to be able to carry the cluster around when needed and be able to quickly:

As a reference, the network diagram must be something like this:

Typically in this kind of builds, switches are used. However, using no-static configurations (and even a .lan local name) will require a router. Most home-grade routers have no functionalities that would favour this build, namely, using WiFi as a client-mode to provide Internet, and, consequently, the ability to bridge the WAN-port to the switch, which adds an extra useful port to the router (since WiFi provides the Internet connection). Other perks such as VLAN management and others could be useful for later experiments, so have such advanced router management capabilities would be a plus.

I had three routers lying around, so the journey began of finding a proper alternative firmware that would provide such features. The best candidate among those was the Linksys WRT54G (more info) series, since it was one of the most well-supported series. However, the specific version that I have (WRT54GS v7) is only supported by an old version of DD-WRT primarily due to hardware limitations. After several hours messing around configurations, several issues with local domain resolution and DHCP led me to abandon it.

The next one was an ASUS RT-N12E_B, which, supposedly, is supported by OpenWRT. However, after flashing, I couldn’t get the router to work in WiFi client mode (the signal was so weak that even with the 3rd-party router really close to it, it would not connect). After searching around, I found out that there’s an alternative firmware for it called Padavan. This happens to be a pretty good all-around firmware but had a down-side: I could not bridge the WAN port to the switch.

The last alternative was the TP-Link TL-WR841N v.9. This router is compatible with DD-WRT, and after dealing with some region lock features (that made me flash the router with an older version of DD-WRT and then update it), it was ready to use.

First off, I wanted to be able to manage the 4 RPis using my laptop, thus the need for 5 switch-connected ports. The first configuration required was to go to Setup and check the box Assign WAN Port to Switch. After that, it was needed to configure the router as WiFi client. There are two modes of WiFi client, the Client Bridge – where the router becomes part of the same subnet as the host – and Client Mode (unbridge) – where the client router is unbridged in a different subnet (with NAT). In this case, we want the last option; thus, we need to make sure that the client router is in a different subnet than the primary host router. This is explained in the DD-WRT wiki as follows:

We also need to enter the Wireless access credentials of the host network (Wireless->Basic Settings) and set DHCP to automatic (Setup->Basic Setup->Connection Type).

Further, we want to be able to access the RPis by their hostname, e.g. hostname.lan. To do so, we use the DNSMasq as DHCP server, by checking the Use DNSMasq for DNS in the Setup->Basic Setup, enabling Local DNS in the Administration->Services, set the LAN domain (e.g. lan), and, add the following to the Additional DNSMasq Options:

The next step was to connect the RPis one-by-one to the router ports and connected them to power. Every time a Pi was connected, the following procedure was followed:

The DD-WRT presented several operational problems after some time, such as random reboots and reboot loops (which, eventually, lead to everything stop working). I was able to upgrade the router to an OpenWRT firmware using the TFTP recovery instructions. The manual configurations needed are:

For some reason, while I could talk with the Raspberries from my laptop, I could ping an RPi from another unit with the error no route to host. This seemed a known issue with the router VLANs and WAN port reassignment, which could be fixed by adding the following to the router startup scripts:

After rebooting, all the network operated as expected.

After, finally, having the network up and running, I wanted to add some monitoring capabilities to keep track of resource usage and devices temperatures3. I have used in the past a combination of Telegraf + InfluxDB + Grafana for building such monitoring; thus, that was the go-to solution. However, I have quickly faced a peculiar problem: Telegraf is unable to use local name resolution due to some issues with the ARM builds (related discussion).

Thus it was time to try something new for some observability (o11y). I have heard of Prometheus before, so it seemed a good opportunity to try it out. They provide a similar agent to Telegraf called Node exporter. The Node exporter has builds for many architectures and worked out-of-the-box in the different Raspberry Pi versions (the original RPi, which is an armv6 and the following revisions, which are armv7). After installing, one can run it with node_exporter & exposes the device metrics in the port 9100 by default (making it easy to verify if everything is working as supposed with a simple curl http://raspberrypi0.lan:9100/metric).

If you want to make node_exporter permanent, you can create a service with it by creating a new file /etc/systemd/system/nodeexporter.service:

The raspberrypi0.lan was picked to be the monitoring host (since version 2 has enough resources and is at the bottom of the stack). In this host, Docker and docker-compose was installed to ease the process of deploying the data collection (Prometheus) and visualization (Grafana) stack: sudo apt install docker docker-compose.

Prometheus require some extra configuration in yaml with information about the hosts:

With the configuration of Prometheus done, we can build our docker-compose.yml with Prometheus and Grafana.

Prometheus provide an out-of-the-box Web UI that allows running queries over the collected metrics – the expression browser and to check the status of the monitoring targets in Status->Targets. The query language documentation can be found here but the autocomplete feature of the expression browser is a good starting point.

For configuring Grafana to retrieve data from Prometheus, go to Data Sources and add a new Prometheus data source, specifying the name of the container as the connection string, prometheus.

For building the main dashboard with all the metrics on Grafana, I used as base the Node Exporter for Prometheus Dashboard by starsliau. However, some minor changes were required: add a panel with the different RPis temperatures and modify the Job drop-down to let all jobs (since each RPi is a different job). You can find the modified version in this gist. 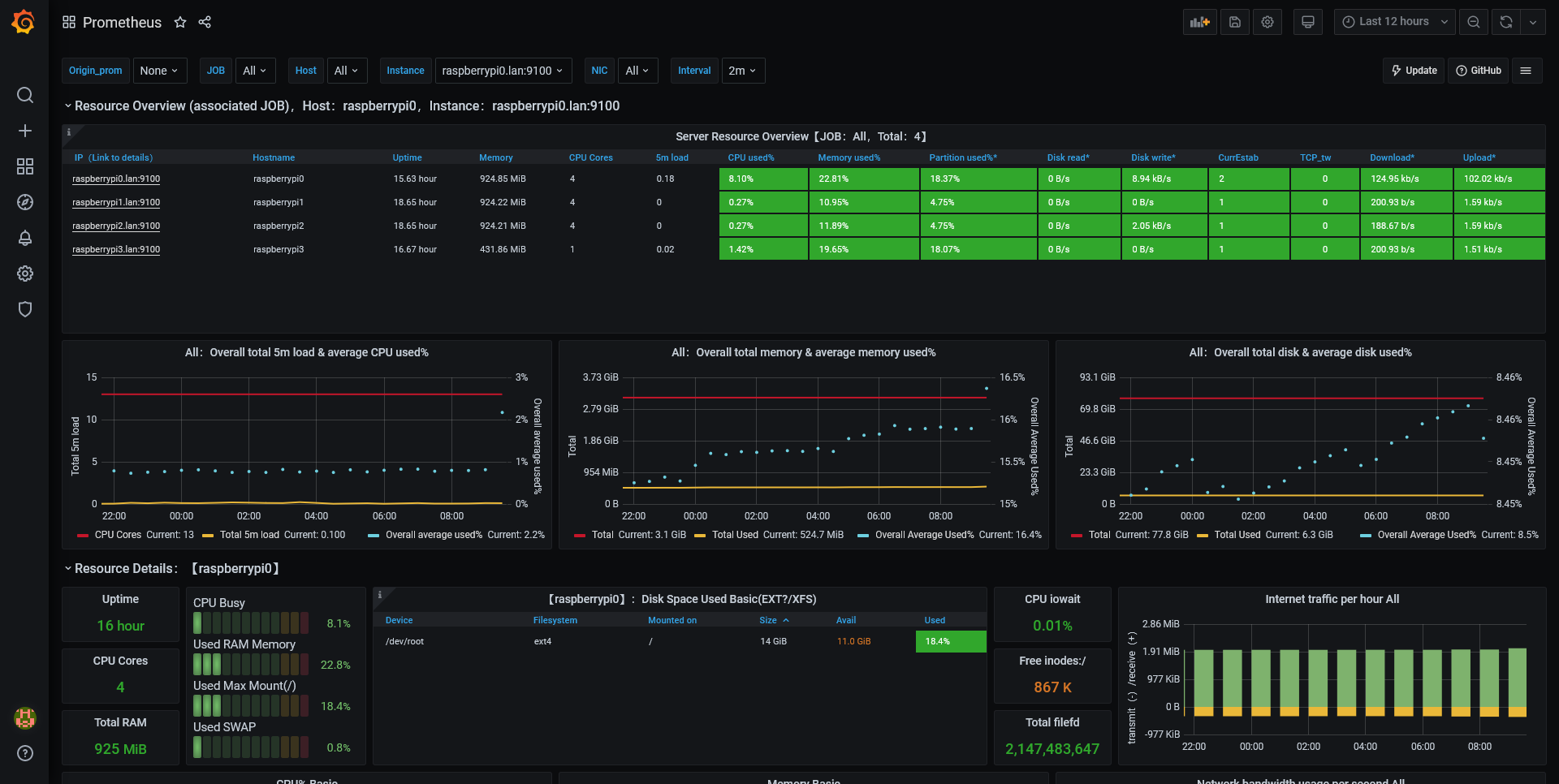 Additionally, I would like to access metrics related to the router (DD-WRT) and showcase them in the Grafana. However, the TP-Link router does not have JFFS, thus the only build compatible is a micro version that neither provides snmp (which could be fectch using Prometheus snmp_exporter) nor allows to run additional applications (which would enable us to use the Node exporter MIPS build).

The final setup consists of 4 different RPis connected by SSH. However, to carry simple tasks, such an update implied manually create an SSH session to each host and run the command. While searching for a solution to quickly run a command in all the hosts at the same time Ansible was repeatedly recommended, since it only requires an SSH connection to the host and a Python interpreter installed in the target machine (which already comes installed in the Raspberry OS).

After installing Ansible in my laptop the first thing was to create an inventory.yml with all my hosts, default Python interpreter (ansible does auto-discovery of the Python interpreter available if not specified) and SSH username:

After that, with the already configured ssh-agent, we can quickly check if we can reach every RPi with a ping ansible -i inventory.yml -m ping all, obtaining four pongs as answer. Other examples of quick commands:

More complex tasks can now be automated with ansible-playbooks.